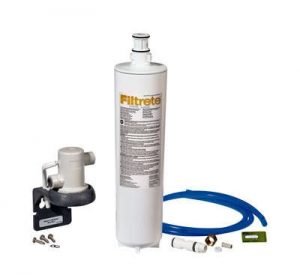 (hover to zoom)(tap once to zoom, tap left, right, top, bottom to move image, tap outside of image to cancel)
Read More About The Filtrete Water Filter Reviews Here

The FILTRETE-3US-PS01 Water Filter offers both value for money and a great product rolled into one. With positive reviews running into several thousands we understand why this Filtrete water filter is ever so popular. 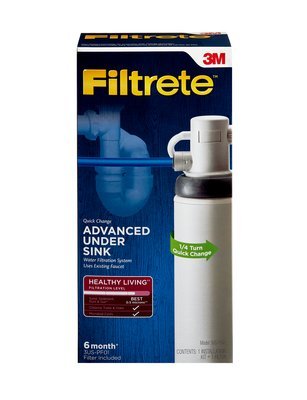 If you’re looking for an undersink water filtration system that won’t break the bank, you might want to check out the Filtrete Water Filter. Granted, it could be said the cartridges are somewhat pricy (especially compared to the price of the entire rig), but then again, they more than make up for it by how easy it is to replace them.

Depending on how unpalatable your municipal water is, you might forgo getting a filtration system and just keep drinking it (some even develop a taste for it). All jokes aside, though, it’s no rare occurrence that the municipal water is too chlorinated. Now, chlorine in and of itself isn’t the problem, but its DBPs (disinfection by-products) are, not to mention the hideous taste and odor.

One way to deal with this is buying bottled water, but you’d be doing a great disservice to the environment (and your budget) that way. Alternatively, you might try getting a distiller and boiling the water before use to remove the solids, but that still won’t do you any good when it comes to chlorine and its by-products, which brings us back to square one.

With this in mind, hooking up a water filtration system under your sink and replacing the cartridge every now and then doesn’t seem too bad, does it?

The Filtrete Water Filter comes in three distinct flavors, all of which are fully interchangeable with each other’s system. The major difference between these is their filtration capacity, which is pretty much reflected in the names – Standard (3US-AS01), Maximum (3US-MAX-S01) and Advanced (3US-PF01). For our part, we’ll be focusing on the latter, bringing the other two into consideration only for the sake of comparison and being thorough.

This is an undersink filtration system that doesn’t require a separate dedicated drinking water faucet. It does its job at a rate that is more than adequate for supplying a regular kitchen faucet. It’s a simple 1-stage system (sand and sediment), with no moving parts, and the installation is rather straightforward (as we’ll discuss shortly).

As mentioned above, the Filtrete Water Filtration system relies on sand and sediment to filter about 97 per cent of chlorine, 97 per cent of odors and tastes, almost 100 per cent of organic waste and solid contaminants (sand, soil, silt, sediment, rust, the works). According to the manufacturer’s site, the Standard variant (3US-AS01) is an all-round performer, though it doesn’t remove microbial cysts.

Conversely, the Maximum variant (3US-MAX-S01) is a much better choice if you target specific chemicals, such as Atrazine (a herbicide) and Toxaphene (a pesticide), as well as a number of organic pollutants (Cryptosporidium and Giardia cysts) and lead. In other words, it’s much better for suburban and rural areas, i. e. households surrounded by gardens and/or agricultural fields. The only downside to it is the somewhat lesser capacity in terms of quantity (1,500 gallons to the Standard’s 2,000).

On that same note, the aptly named Advanced model (3US-PF01) filters everything the Maximum does, but comes with the capacity of the Standard – 2,000 gallons. In essence, really, when discussing the three systems, we’re actually discussing the filter cartridges rather than the housing. That said, none of the three models remove fluoride, so if you’re looking something to help you with that specific problem, you might want to look elsewhere.

The entire rig is fairly space-efficient – the measurements are 5.75 x 15.625 x 4.25 inches (not even a third of a cubic foot), which allows it to sit nice and tight under the sink, and you’ll still have more than enough room to store other things.

The installation takes about half an hour, less so if you’ve already dabbled in undersink water filtration systems (or just ordered anything from IKEA). On a more serious note, the installation is rather straightforward, and the system comes with everything you need to mount it but the tools, so you won’t have to stop by the hardware store (unless you planned on doing some home improvement project). This includes a variety of fittings and screws, the filter cartridge itself, the valve-head assembly (the mounting bracket is already attached), two lengths of 3/8-inch polyethylene tubing, a 3/8×1/2-inch faucet adaptor, as well as a replacement sticker to remind you to, well… replace the filter.

Obviously, the first thing you’ll want to do when installing the system is turn off the cold water supply and remove the line that feeds the kitchen faucet (use a 3/8 wrench or pliers to loosen the valve). Take the adaptor from the kit and attach the male end to the hose that feeds the faucet, leaving the quick-connect end free (you’ll need a pair of pliers and a 5/8 wrench to tighten it all the way). This is where you insert one of the two pieces of the blue tubing (you’ll know you’re in when you feel it snap into place).

Here’s where things get interesting – in order to prevent the possibility of water leaking, you’ll need to carefully follow this part of the instructions. What you want to do is take the other piece of the blue tubing and do some prep-work – slide the brass fitting over the tubing (threads toward the end of the tubing), then slide the ferrule (thin, tapered end facing the end of the tubing, as well), and then stick the plastic insert inside said tubing. Now you’ll want to take the entire thing and attach it to the cold water supply valve.

This is a nice time to get thinking about where to mount the entire rig. Typically, you’ll want to avoid the backs of cabinets, as they’re almost always thin and too flimsy to hold anything. Moreover, it’ll mean reaching the system when you need to replace the filter cartridge would be somewhat trickier. That said, probably the best location to mount the filter would be on the side of the cabinet – not only will it be more secure there (seeing as the sidewalls will be thicker than the back walls on average), but it’ll also be much easier to  reach it when the cartridge fails.

When measuring the height for the screws’ location, make sure you have at least 2.5 to 3 inches of clearance from the floor of the cabinet, so that you can actually replace the cartridge. Once you’ve screwed the bracket with the valve-head in, it’s time to attach the water lines. The lower quick-connect fitting is the inlet line, so this is where you want your cold water supply line to fit. The upper, obviously, is the outlet line, and this is where you’ll fit the length of tubing that you attached to the line that feeds the faucet. Just snap those in (again, you’ll know you’re in when you feel it pop), screw in the cartridge, and you’re good to go.

As far as replacing the filter goes, the process is just as straightforward. All you have to do is unscrew the old filter and then screw in the new one, and you’re good for another 6 months. Speaking of which, it would be nice if they were a little bit less expensive, but then again, nothing’s perfect. Once the filter is up and running (which would be the minute you use the faucet, no worries about forgetting to flip a switch), you shouldn’t see any restrictions in the flow. On that note, since the system is hooked up to the cold water supply, you won’t have to worry about destroying the filter with hot water.

As mentioned above, the average filter life is 6 months, though that will largely depend on how much water your household uses during a certain period. A more accurate way to figure this out is to refer to the capacity of the cartridges for the three variants. The Advanced model has a 2,000-gallon life, which is the same as the one on Standard, while the Maximum is somewhat more modest – “only” 1,500 gallons.

All in all, the Filtrete Water Filter is pretty much up to scratch when it comes to undersink filtration systems – it’s easy to install, removes the pesky odors and taste from the municipal water, and it even doesn’t cost too much.

However, the real beauty of this setup is that you don’t require a separate dedicated drinking water faucet – all it takes is just the regular kitchen faucet. Installation is pretty much like playing with Legos, and replacing the filter cartridge is even simpler.

Granted, the cartridges are somewhat pricy (compared to some competitors’ items), but then again, you won’t be replacing them more than twice or thrice a year (depending on how much water your household needs), so it’s safe to say the ease of use more than makes up for it.

Finally, one of the major, if not the major selling point of the Filtrete Water filter is that the cartridges are interchangeable, so you can order up the Standard, and then switch to Maximum or Advanced, depending on your needs. We really like the FILTRETE-3US–PS01 Water Filter , the Advanced model and think you will love it too.