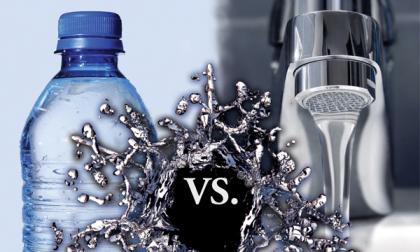 Public concern about tap water quality has resulted in a massive growth in bottled water sales which have tripled in the last decade. Bottled water is the fastest growing and most profitable segment of the beverage industry.

On average Americans back in 2004/2005 drank 24 gallons of bottled water. This figure showed the popularity,  making it second only to carbonated soft drinks. Slick marketing and advertising still work for bottled water.

People are paying 240 to 10000 times for bottled water than tap. So to give you an idea about the price of one bottle of a well known branded water. This is equal to between 100-900 gallons of tap water in the home, depending on the bottled water. Is bottled worth it? The answer is no. Bottled water is often no better than water straight from your tap.

The misconception that bottled water is better than tap water can be attributed to the millions spent by water bottle companies on advertising to convince the public that their water comes from a pristine mountain spring. The truth is often bottled water is just tap water in a bottle, and sometimes worse.

Federal regulations only require bottled water to be as good as tap water. There are no requirements or regulations for it to be any safer or better than tap. NRDC did a study in 1999 that tested over 1000 bottles of 104 bottled water brands. One-third contained levels of contamination including:

Bottled water is less rigorously tested than tap water for:

This opens up the possibility that some bottled water may pose a health hazard to the elderly, infants, cancer patients, people living with HIV/AIDS, and other people with weakened immune systems.

Case Western Reserve and Ohio State University compared 57 bottled water samples to Cleveland’s tap water. While 39 samples were purer than tap, 15 had significantly higher bacterial levels. Scientists concluded although all the tested water was safe to drink “bottled water on the assumption of purity can be misguided.”

Kansas Department of Health and Environment tested 80 samples of bottled water from manufacturers & several different retail stores. This is what they found:

Plastic water bottles can take up to 1000 years to biodegrade and end up in the garbage at a rate of 30 million a day. Besides taking up valuable space in landfills, plastic water bottles may contribute potentially toxic chemicals such as phthalates into the groundwater. “It’s ironic that many people drink bottled water because they are afraid of tap water, but then the bottles they discard can result in more polluted water,” says Pat Franklin, executive director of Container Recycling Institute. “It’s a crazy cycle.”

CRI estimates that producing water bottles used by Americans for one year consumes more than 1.5 million barrels of oil. This is actually considered enough to generate electricity for

Recently there has been an improvement in the packaging, including Paper-Based Recyclable Bottles and water box bottles.

Bottled water is neither cheaper, safer, or more environmentally friendly than tap water. However, water contamination is a problem that governments can solve by repairing current tap water infrastructures. We looked earlier at lead content from old pipework being a concern. Contaminants entering the water chain needs addressing by protecting water sources from harmful farm, industry and urban pollutants. Using a filter means there is only one winner in the filtered water vs bottled water debate.

Until then, an easy, cost-effective solution for healthy, contaminant-free water in your household is to invest in a great filtration system.